Jesus on divorce: Law or Grace? 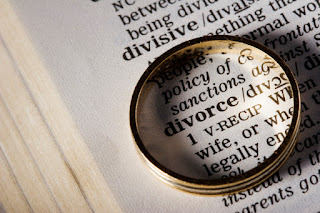 Mark 10:2-16 is a text that has bedeviled people of faith for generations.  It seems to portray Jesus as a law giver.  Is he?  Perhaps a few observations regarding the conversation between Jesus and the Pharisees can give us a hint as to what is really going on here. 1) The Pharisees approach Jesus "to test him"(vs. 2).  This reveals that the question they ask Jesus they already know the answer to, and they expect Jesus to say something contrary to the law as they know it, (i.e.  they expect Jesus to say that divorce is not lawful when they believe it is); 2)  Jesus' question, "What did Moses command you?" is not the question they answered:  "Moses allowed a man to write a certificate of divorce."  (see Deut. 24:1) Jesus asked what was commanded; the Pharisees told Jesus, in effect, what they could get away with - a big difference; 3)  "Being joined" to a wife (vs. 7) means "to be faithfully devoted" to a wife, certainly a status implying care of wife as neighbor, (in faithfulness to the Great Commandment) not simply a legal arrangement.

1.  How does the Word function in the text?  Jesus, the Word, is certainly functioning, at first glance, as lawgiver.  He is telling us what we may and may not do.  He is calling us to repentance for our "hardness of heart."  He is calling into question any practice that allows a person in authority to simply dismiss or discard another because they find them "objectionable." (Deut. 24:1)  But this same word, as overheard by the wives of the Pharisees, would have been pure gospel, for it would have revealed to them, "You are beloved of God.  You may not be cast aside.  You are as treasured in God's eyes as your husbands are."  So the audience will determine the function of the Word here.

2.  How is the Word not functioning in the text?  Again, it is the audience who will determine the function here.  If the audience is the Pharisees and those who identify with them, then there is no word of Gospel here, but only the call to repentance.  If the audience is understood to be the women who overheard this, then this is not a call to repentance but a word of pure Gospel.  There is no word of Law here for the vulnerable women who heard this exchange, only good news.

3.  With whom are you identifying in the text?  This text is unusual in that we could choose to identify with those who overhear the dialogue, or those involved in it.  As usual, we do well to steer clear of identifying with Jesus, so our choices are simply 1) the men (Pharisees and disciples), or 2) the women, who also could be identified as "the little ones" with whom Jesus interacts after this exchange.  It is telling that the disciples are consistent:  they understand neither Jesus' concern for vulnerable women, nor his concern for children.

4.  What, if any, call to obedience is there in this text?  The command to care for the "little ones" - any who are vulnerable - is clear here.

5.  Exegetical Work:  Several brief articles from the Interpreter's Dictionary of the Bible are helpful in understanding this text.  First, the article on divorce (IDB, I, 859) reveals that "something objectionable" (NRSV) in Deut. 24:1 was very loosely defined.  Indeed there were two schools of thought as to what this meant:  "The Hillel school viewed this as a general term, and the Shammai school took it to mean adultery only."  A woman's inability to bear children was a common reason for divorce.  The article on marriage is also instructive (IDB, III, 278f).  Note the following:  "The husband has the power over his wife...She has rights and freedoms only within the context of this authority...  The husband may even revoke a vow that his wife made to God, if he sees fit. (Num 30:10-13)..." Finally, the article on woman is also revealing:  "The father received a bride price for his daughter and thus engaged in a contract with the prospective husband to make her sexuality available to him.  This transaction, however, was not a transfer of chattel property.  Rather it was the surrender of authority over a woman by one man to another." (IDB, IV, 864f)   All of this reveals why Jesus viewed wives as "the little ones" (i.e. vulnerable ones needing protection).  In his law-giving, Jesus was championing the cause of women who would be living in abject poverty, without support, if dismissed by their powerful husbands.

Posted by Law and Gospel Everywhere at 3:42 PM