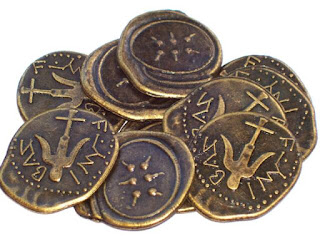 The story of the widow's mite from Mark 12:38-44 has long been a vehicle for stewardship sermons.  It hasn't worked very well probably because the story can be viewed, on one hand, as an excuse for people who give little and say, "See, in this story the amount doesn't matter," and on the other hand by others (mostly those of us who depend upon the offering plate for our wages!) who say, "See, she gave everything she had!"  Perhaps a closer look at this story will reveal that this story is about larger things like hypocrisy and faith, pretense and love, and the distinction between priceless and worthless.

(The following questions are important to Law and Gospel preachers as we attempt to "do" in our preaching what the text "does" in our hearing.  A complete explanation of this method can be found in my book Afflicting the Comfortable, Comforting the Afflicted, available from amazon.)

1.  How does the Word function in the text?  The primary function of this text is hinted at in Jesus' first word: "Beware."  Later he talks about the "greater condemnation."  This is clearly the Law at work.  The text is lifting up our human tendency toward showy piety, our view of the world in which market value is assumed to be God's value, and our failure to recognize faith when we see it.  This word shows us clearly our bondage to sin and our need for God's grace.

2.  How is the Word not functioning in the text?  A word of Gospel is hard to find in this story, although I think there is a hint of it in Jesus' commendation of the woman's actions.  When he says that the widow "out of her poverty has put in everything she had, all she had to live on," Jesus is pointing out the amazing freedom of this woman.  He is pointing out her confidence in God's provision. He is lifting her up as an example of one who is filled with faith, so although Christ's work is not shown in this story, it can perhaps be assumed.

3. With whom are you identifying in the text?  This is an interesting question.  Our first choice is always those who are being addressed by the Word, whom in this case, are the hypocritical scribes.  Another choice, however, could be the disciples who are being instructed.  They, undoubtedly, would have assumed that the greater offerings were being given by the wealthy.  But finally, how about identifying with the woman?  Is it possible to identify with the person Jesus is commending?  This is always tricky, but it might be a vehicle for lifting up an anonymous individual of modest means who is an example of freedom in giving.

5.  What Law/Gospel couplet is suggested by this text?  Several couplets readily come to mind:  hypocrisy/repentance, bondage to fear/freedom to give, worthless gifts/priceless gifts.  The final couplet could lead quite nicely into the Gospel word about Christ's priceless gift of his very life.

6.  Exegetical work?  A word study of the Greek terms in this brief story unearths a few nuggets that can become sermons in themselves:  The widow is described as one of the "ptoxos" - a destitute person, most likely subsisting by begging.  This word seems purposely chosen to contrast with the "plousioi" - the wealthy, who put large sums into the offering boxes.  Another term which is rich in meaning comes at the end of the passage where Jesus says she puts in "all she had to live on." The term is well known to us:  "bios." It means one's whole life.  This woman has put her "whole life" into the offering plate.

Another source of rich commentary that doesn't pertain only to this story, but to any that have to do with liberality is Ernst Kasemann's book Jesus Means Freedom.  In this book the author points out that "for [Jesus], the attitude that man has to express is primarily that of need, which is not surpassed even by worship." (p. 32). Kasemann also reminds us how "Luther spoke of  the man outside grace as the homo in se incurvatus, the man inescapably imprisoned and entangled in himself." (p. 39)  This work is a rich source of thought on freedom for any text.

Blessings on your proclamation!
Posted by Law and Gospel Everywhere at 10:15 AM