Parable of a Prodigal Father 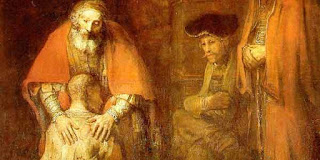 Luke 15:1-3, 11b-32, the gospel lesson appointed for the 4th Sunday in Lent, the parable of the Prodigal Son, is undoubtedly one of the most well-known of all Jesus' parables.  Like Rembrandt in the painting above, artists, poets, writers, and preachers the world over have pondered this simple tale and sought to bring it to life in a fresh way.  The thing that strikes me is how prodigal the father is.  The first meaning of prodigal in my Webster's Collegiate Dictionary is "recklessly extravagant", and it seems to me this is an apt description of the father's welcome home party for the younger son.  Is there no limit to his joy? we might ask.  Oh, how even that question betrays our own attitude as more akin to the elder brother's than to the Father's.

(The following questions are an attempt to unearth some of the issues for Law/Gospel preachers.  If you wonder what Law/Gospel preaching is about, check out my brief guide, Afflicting the Comfortable, Comforting the Afflicted, available from amazon.)

1.  How does the Word function in the text?  The way the Word functions here is really dependent on which character in the story we identify with.  (This is often the case, actually.)  If we assume the identity of the younger brother, if we have known "the far country" and have been in places of want and distress where we "come to ourselves", then this story is very much Gospel.  The joy of the Father simply overwhelms us. We had thought that we had to be worthy of the Father's love, even to be called one of his servants, much less a son, but the Father will have none of it.  He ignores our speeches of false humility, and simply embraces us and celebrates our return to life with unmitigated joy.  If, on the other hand, we find ourselves identifying with the elder brother - and often this is exactly where we church folk need to find ourselves - this story functions as Law.  We are shown our hardheartedness, our self-righteousness, our blind fury at the prodigal forgiveness of the Father.  We refuse to see the lost soul come home as brother, and in so doing we forfeit our relationship with the Father.

2.  What, if any, call to obedience is there in this text?  The call to obedience buried in this story of love and grace, is the call to treat others as brothers and sisters.  We, who have been welcomed home despite our unworthiness, as well as we whom the Father has said are heir to all things, are called to view others as our brothers and sisters in Christ.  This story is one without an ending, inviting us to be reconciled with those whom we have decided are unworthy of the grace of God.

3.  What Law/Gospel couplet is suggested by this text?  The end of the story provides us with some ready-made couplets:  lost/found; dead/alive; estranged/embraced.

4. Exegetical work:  There is no better article on the distinction between the obedient and sinners than the one found in the first volume of Kittel's Theological Dictionary of the New Testament.  This extended article is written around the term for "sinner" in vs. 15;1 where Luke writes that "all the tax collectors and sinners were coming near to listen to him."  Here are just a few highlights:  "The [sinners in the OT] are a definite religious type. Throughout the Psalter they are the opposite of the pious, righteous, and godly, in short of those who with the author of Psalm 1 have made it the goal and contest of their lives to serve God in His Law day and night with all their heart and soul and mind." "[They] boast of [a part] in God's covenant with Israel,... but [do]not follow the Law, persistently break commandments, show no signs of repentance, boast of wickedness and ungodly folly, trust in their own wealth and power and not God, and perhaps even go so far as to ignore God completely." (p. 320)  In NT usage, sinners were "those who lived a flagrantly immoral life" or "those who followed a dishonorable vocation or one which inclined them strongly to dishonesty." (327)
"[Jesus] never contested nor avoided the distinction of the people into sinners and righteous... Jesus admitted that the righteous genuinely obeyed God and did what He commanded... Jesus thus accepted as such those who were regarded as sinners by the community... It was just because they were sinners that He drew them to himself." (329)  Jesus calls "the pious and righteous, as well, to repentance, not for their sin, but for their righteousness, which prevents them from seeing clearly either the greatness of God or their own situation." (332)

5. How does the Crossings Community model work with this text?  Marcus Felde does a nice analysis of this text archived under 2013 Year C Gospel for the 4th Sunday in Lent.  He shows how our desire for the God of fairness instead of the God of mercy finally aligns us with the elder son who is angry and who refuses to go in to the party.  The question, of course, is, is that really where we want to remain?  See crossings.org/text study for the complete analysis.

Blessings on your proclamation!
Posted by Law and Gospel Everywhere at 11:05 AM