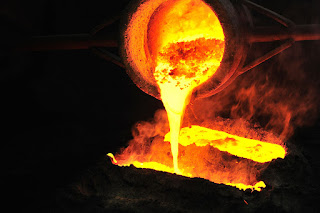 The "messenger of the covenant" in Malachi 3:1-4 is no one to be messed with.  He is like a refiner's fire and like fuller's soap.  In other words, if there is any impurity at all in you, it will not survive this refining process.  Is this good news?  Is it good news that the descendants of Levi will be purified?  If we believe that sin leads to death it is.  We need desperately to be purified.  How will we hear this word for the 2nd Sunday of Advent?

(The following questions are not meant to be exhaustive, but meant to be used in conjunction with other exegetical methods which draw on different questions. These questions are meant to unearth some of the fundamental concerns of Law and Gospel preachers.  For more on this unique genre of preaching, see my brief guide, Afflicting the Comfortable, Comforting the Afflicted, available from wipfandstock.com and amazon.)

1.  How does the Word function in the text?  This word is primarily Law. The question is asked, "Who can endure the day of his coming?" and the understood answer is, "Nobody can."  We are those who need the refiner's fire and the fullers' soap to be purified of the dross in our lives.  We are the ones who desire that our offerings will be pleasing to the Lord as in the days of old.

2.  How is the Word not functioning in the text?  A word of Gospel is hard to find here.  Perhaps one might hear a word of Gospel in the promise that "the Lord whom you seek will suddenly come into his temple."  That would be good news only, however, after one is purified.  Likewise we might hear a good word in the promise that our offerings will once again be pleasing to God, but that again  is good news only after one is purified.

5.  What Law/Gospel couplet is suggested by this text?  If we use the words found in this text there are a few directions we may go:  unable to endure/enduring; unclean/purified; unpleasing to God/pleasing to God.

6.  Exegetical work: The first two chapters of this book give the context for the announcement of God's messenger in chapter 3.  In reading these first two chapters we learn that the people of Israel have returned from exile, rebuilt the temple, and have once again begun to make offerings to God.  The trouble is, God is deaf to their prayers and will not accept their sacrifices.  In the debate in chapters 1 and 2 we learn why:  First, God is displeased because the people are  offering only diseased, injured, or lame animals as sacrifices. (i.e, their garbage).  God says, "Offer those to your governor and see if he will be pleased!"  Second, the covenant made by the Levites has been abandoned.  The Levitical covenant wherein the descendants of Levi were anointed as priests of Israel dictated that the priests be men of integrity and uprightness, turning away from evil. This was far from the case, and so God was displeased.  In short, God was not present in the temple, nor answering prayers because both the people of God and the priests of God were unfaithful.  Thus the messenger whose arrival is announced in chapter 3 is coming to "purify the sons of Levi" so that the offerings of Israel might be "pleasing to the Lord as in the days of old and in former years."

7.  How does the Crossings Community model work with this text?  Bruce Martin does a nice job of picking up on the sacrifice theme in analyzing this text.  In his diagnosis he goes back to chapters 1 and 2 and shows how our sacrifices are similarly unacceptable.  In his diagnosis he speaks of Christ's sacrifice which is acceptable for all time.  Go to crossings.org/text-study to see the entire analysis.

Blessings on your proclamation!
Posted by Law and Gospel Everywhere at 1:23 PM