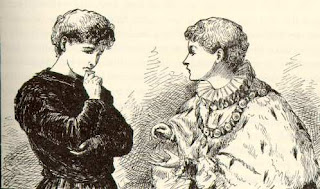 If you are familiar with Mark Twain's novel, The Prince and the Pauper, you know that for a time the main characters in that story exchange identities.  Unforeseen by them, this results in each of them encountering scenarios they hadn't envisioned.  In John 18:33-37, the gospel lesson for Christ the King Sunday in the Year of Mark, we also have a drama in which the main characters exchange identities.  In this case, however, the exchange is done through the skillful writing of John who shows Pilate to be much less than the 'prince' he claims to be, while Jesus is much more than the 'pauper' he appears to be.  Appearances can be deceiving. We too, must be on guard, lest we heed the voice of a counterfeit sovereign.

(The following questions have been developed to get at some of the fundamental concerns of Law and Gospel preachers, i.e. how does the Word function in the text?  These questions work well when used in conjunction with other fine sets of exegetical questions.  For more on this unique genre of preaching, see my brief guide to Law and Gospel preaching, Afflicting the Comfortable, Comforting the Afflicted, available from wipfandstock.com or amazon.)

1.  How does the Word function in the text?  The Word in the words of Jesus functions very much as Law here. The difference in this text is that it is all done using irony.  Pilate asks Jesus, "What have you done?" and later, "So you are a king?"  In each case, Jesus turns the table on Pilate and you can almost hear the questions returning to Pilate:  "You have done what, Pilate?  You, Pilate, are a king?"  Pilate thinks he is interrogating Jesus, but it turns out to be the opposite; Jesus is the one asking the questions. This is how the Law works.

2.  How is the Word not functioning in the text?  It is difficult to hear a word of Gospel here.  Again, if we listen closely with an ironic ear, we might catch some good news. At the end of the dialogue Jesus says, "Everyone who belongs to the truth listens to my voice."  While truth seems to be a threat to Pilate and for any of us when we are claiming an authority not our own, it is good news to hear that we can belong to the Truth - that Truth claims us.  As St. Paul said, "While we were yet sinners - while we yet were in the clutches of our own self-deception - Christ died for us."

3.  With whom are you identifying in the text?  It is always important to identify with the people whom the Word addresses, and in this case that can mean only one thing: we must identify with Pilate.  While we may wish to avoid this, this identification will help us understand our own unwillingness to live under the authority of the Word and of the Christ.  We naturally wish to be the ones who do the questioning, not the ones in the dock!

4.  What Law/Gospel couplet is suggested by this text?  Perhaps like few other texts the classic couplet of guilt/justification fits here.  Other similar couplets could be imprisoned/free; sinner/forgiven.

5.  Exegetical work:  Kittel's extended discussion of the term 'kosmos' is of great help in understanding John's use of the term we translate "the world."  According to Kittel, "the kosmos is the setting of the drama of redemption which is recounted in the Gospel.  All the meanings of kosmos come together in the usage of the Fourth Gospel."  "When Jn. says of the kosmos that it does not know the Son of God, that it does not know God, that it does not believe, that it hates, the kosmos is in some sense personified as the great opponent of the Redeemer of salvation history." (Theological Dictionary of the New Testament, Vol. III, p. 894)  This is shown clearly in this text in the utter inability of Pilate to understand who Jesus is.  One other term which Kittel discusses extensively is "alethiea," often translated "truth": "In John alethiea denotes 'divine reality' with reference to the fact 1.) that this is different from the reality in which man first finds himself, and by which he is controlled, and 2.) that it discloses itself and is thus revelation."  (TDNT, I, 244).  A translation of this brief text is also helpful, especially as we note emphatic word order.  In the opening verse the word translated 'summoned' suggests Pilate was speaking very loudly, saying, "YOU are the king of the Jews?!"  You can almost hear the sneer and see the curl of his lip as he looks down on this ''pauper."

6.  How does the Crossings Community model work with this text?  If you go to crossings.org/text-study you will see my diagnosis and prognosis around our "belonging." We so badly want to belong.  This longing to belong gets us in trouble.  It is only because of God's overpowering desire that we belong to God that we are saved.

Blessings on your proclamation!
Posted by Law and Gospel Everywhere at 2:34 PM No comments: 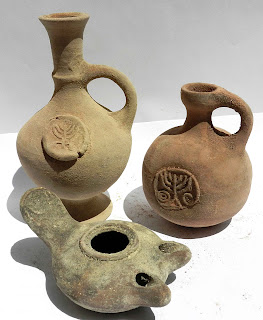 The First Reading appointed for the 25th Sunday after Pentecost in the Year of Mark is the story of Elijah and the widow of Zarephath, I Kings 17:8-16.  This is a marvelous story to be matched with the gospel story of the widow's mite from Mark 12:38-44.  Both stories share examples of women of faith, risking all, believing the promises of God.  Give us such boldness, Lord!

1.  How does the Word function in the text?  This story lifts up an example of faith, the unnamed widow of Zarephath.  More than that the story announces the provision of God, the utter reliability of God, even in the face of scarcity.  The story makes clear that God preserves and provides for God's servants.  This is a gospel function.

2.  How is the Word not functioning in the text?  There is no "hammer breaking in pieces" the human heart in this story (i.e. the Law).  No one is condemned here,  and yet deliverance is needed - deliverance from starvation.  The woman says that she will prepare food for herself and her son, and then die.  In this way, though the text is not functioning to show guilt, it is showing us our utter impoverishment, aside from God's provision.

3.  With whom are you identifying in the text?  We are undoubtedly the woman and her son, starving apart from God's provision.  We are the ones to whom Elijah says, "Do not be afraid."  We are the ones who receive the call to trust God and give out of our poverty, trusting God.

5.  What Law/Gospel couplet is suggested by this text?  As I alluded to above, the Law could be understood here as the starvation which was imminent.  If that is the case, then some likely couplets could be despair/hope, lack/provision, and death/new life.

6.  Exegetical work:  The first thing to notice is that this unnamed widow is a foreigner, from Zarephath, "which belongs to Sidon." Sidon is where wicked queen Jezebel is from.  Sidonians worshipped Baal and Ashforeth.  If God was going to use someone to provide for the needs of one of God's prophets, this would seem to be a most unlikely candidate.  Jesus will later allude to this faithful widow in his first sermon in Nazareth. (Luke 4:25-26).  Augustine, in commenting on this passage, suggests that "Elijah came to the widow because Christ was to come to the Church." (Ancient Christian Commentary on Scriptures, OT, Vol. V, p. 103)  The Church, Augustine suggests, is also an unlikely recipient of God's grace, but similarly is dying apart from God's provision.  Again, Augustine says, "Why was it that no Jewish widow merited to offer food to blessed Elijah...? That widow...typifies the Church." (Ibid.)  Matthew Henry, in his commentary, notes God's sneaky provision by noting that "Jezebel was Elijah's greatest enemy; yet, to show her the impotency of her malice, God will find a hiding place for him even in her own country." (textweek.com)

7.  Consider the insights of the pioneers of the New Homiletic?  Fred Craddock was always insistent that the preacher must bring the experience of the text to the listener.  Perhaps our task here will be to help our listeners experience their own desperate hunger and then rejoice in God's abundant provision.

Posted by Law and Gospel Everywhere at 12:59 PM No comments: