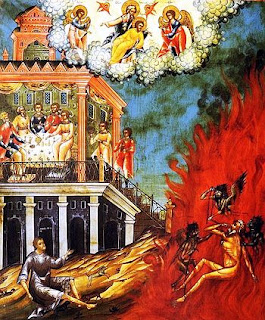 Luke 16:19-31, the gospel lesson appointed for the 19th Sunday after Pentecost, is noteworthy in that chasms of every kind play key roles in the parable.  There is the spiritual chasm between the rich man and Lazarus which prevents the rich man from seeing the poor man lying at his gate.  Then there is the chasm in Hades between the rich man in torment and Lazarus in the bosom of Abraham.  And finally there is a chasm of faith that prevents the five brothers from mending their ways even though someone should rise from the dead.  How will these chasms be crossed?  That is the question.

(The following questions are taken from my brief guide to Law and Gospel preaching, Afflicting the Comfortable, Comforting the Afflicted, available from wipfandstock.com or amazon.  They are not meant to be exhaustive, but they get at some of the issues for law/gospel preachers.)

1.  How does the Word function in the text?  There is little question that in this text the Word functions as law.  The Law always points us to Jesus saying, in effect, "You need Jesus."  The last line, particularly, shows us our broken state:  "If they do not listen to Moses and the prophets, neither will they be convinced even if someone rises from the dead."

2.  How is the Word not functioning in the text?  There is no gospel word here.  Yes, Jesus will rise from the dead; yes, the poor man has been comforted; but still there is no word here that says, "Here is Jesus come to bring you life."  We will need to explicitly bring the Gospel to bear on this text by using other texts.

3.  With whom are you identifying in the text?  It is always important to identify with those being addressed by the Word. Who are they?  In this text they are most likely the Pharisees, as revealed in verse 14.  They are revealed there as "lovers of money."  Is it comfortable identifying with these folk?  No, it is not.  In the parable the Pharisees are portrayed as the rich man and his five brothers.  Again, are we comfortable identifying with the rich man and his brothers?  No, we are not.  Yet that is the Word we are given.

5.  What Law/Gospel couplet is suggested by this text?  Given that this is not a gospel text we must imagine a new scenario in order to complete a couplet.  Some suggestions are:  in agony/comforted; chasm between God and us/chasm crossed; deaf to Moses and the prophets/hearing in faith.

6.  Exegetical work:  There are any number of excellent commentaries on the parables of Jesus.  Here are a few insightful comments from some of those scholars:  Bernard Brandon Scott writes:  "The rich man's fault is that he does not pass through the gate to help Lazarus.  It is not simply that at the end there will be a reversal or that God will help the poor.  Even more, 'so long as there is time, the gate/door to the neighbor lies open to be entered and passed through, while one day the chasm between those distanced from each other will not be able to be bridged.'" (Hear Then the Parable, p. 158-159.)  Luise Schottroff has this to say:  "The Pharisees (or better: some Pharisees) are not really being addressed as representatives of this wealth, but rather as those whose interpretation of Torah legitimates this wealth and indirectly profits from it. The Lukan Jesus presents his social analysis in accordance with Torah.  It is his vision that Pharisees and wealthy Jews should remember the Torah - and that means its idea of social justice - so that the universal liberation of the people can become a reality." (The Parables of Jesus, p. 170)  Amy-Jill Levine, in her recent commentary, challenges many traditional readings of this parable which see neither a teaching about the afterlife nor a teaching about economic status in this parable.  She asks: "What if the parable does say something about the afterlife, which is what the church fathers thought and probably what the majority of the original auditors of the parable... thought as well?  What if we took seriously Jesus's own concern for how people related to each other, or how they might live if they already had one foot in the kingdom of heaven?  What if the parable does say something about economic status, a major concern of both the scriptures of Israel and Jesus of Nazareth?"  (Short Stories by Jesus, p. 250-251)  Good questions.

Blessings on your proclamation!
Posted by Law and Gospel Everywhere at 9:29 AM