Not Wishing to be Cheered Up 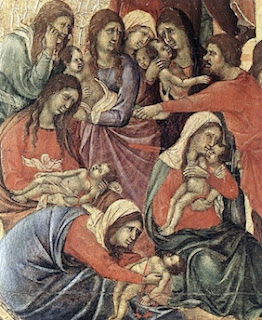 The Slaughter of the Holy Innocents, found in Matthew 2:13-23, the text appointed for the First Sunday after Christmas, is a story that theologian Phylis Tribble famously called a "text of terror".  That is an apt description.  There are few texts in the Bible to match it.  Having it assigned for the day means being put face-to-face with the violence that is not only present in the world, but is even more evident at the birth of the One who is called Prince of Peace.  This text is not for preachers who are faint of heart!

1.  How does the Word function in the text?  Undoubtedly, the main function of the text is Law.  This text brings us into the world of violence - murderous kings, a flight in the night for refugees, and all the rest.  This text shows us how much we need the hope that only God can give.  That being said, even amidst all this, there is a sense of Gospel, because of the phrase, "This was to fulfill what had been spoken by the prophet."  Even amidst the tragedy and bloodshed God is at work. This is good news!

2.  How is the Word not functioning in the text?  There is no call to obedience in this story.  That is to say, there is no point at which we are invited to live in a certain way in response to the Gospel.  We will need to look elsewhere for that.  Paul's words in Romans 8 are a good place to start.

3. With whom are you identifying in the text?  The Word most clearly addresses Joseph in this text so he must be our first choice.  Joseph is the one who receives the word from the angel concerning the murderous plans of Herod, and also the word of Herod's death.  Joseph, therefore, is the one who receives the Word which saves his family, and also assures him that he is free to go home.

4.  What Law/Gospel couplet is suggested by this text?  Again, Joseph is our key.  Several couplets come to mind:  in danger/safe from harm; afraid/at peace; in flight/home at last.

5.  Exegetical work:  It is interesting to compare this story with the story of Moses.  Not only does that story also involve a murderous king and a miraculous rescue, but the very words that the angel uses in Matthew are present in the Moses story:  "Those who were seeking your life are dead." (Exodus 4:19)  To understand the wickedness of Herod  it is instructive to know that Augustus reportedly said of Herod, "It is better to be Herod's hog than to be his son."  Herod apparently did not eat pork, but famously had more than one of his sons killed.  One of his most infamous crimes was his command as his own death approached. "The principal men of the entire Jewish nation should come into his presence (at his deathbed) and then be ordered killed after his own death... that it might seemingly, at least, afford an honorable mourning at his funeral!" (Unger's Bible Dictionary, p. 471f)  One note regarding translation:  In verse 18b we read: "Rachel weeping for her children, she refused to be consoled, because they were no more." The phrase translated "refused to be consoled" might also be understood as "wished not to be cheered up."  This is a potent phrase in this time of Christmas 'cheer'. There are probably those amongst our listeners who do not wish to be cheered up, but instead need to be offered hope that goes well beyond merely 'good cheer.'

Blessings on your proclamation!
Posted by Law and Gospel Everywhere at 7:36 AM