God's Agreement? Or Ours? 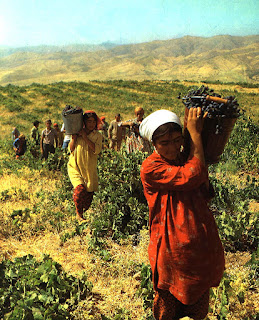 The workers in the vineyard in Matthew 20:1-16, the gospel lesson appointed for the 16th Sunday after Pentecost, are a varied lot.  Much speculation has been done regarding their laziness or industriousness, their availability or unavailability, and other traits.  One group, the ones who are hired early in the morning, are the only ones who speak.  We often identify with them. What if we identified with those who were hired at the 11th hour?  How might that change our reading?

(The following questions bring to the fore some central issues for Law and Gospel preachers.  They are meant to be used in conjunction with other fine sets of questions which get at other issues.  To learn more about Law and Gospel preaching, you may see my brief guide, Afflicting the Comfortable, Comforting the Afflicted, available from wipfandstock.com or amazon.)

1.  How does the Word function in the text?  This word generally functions as a rebuke, or as Law, since we most often identify with the workers who are hired early in the morning and grumble when they learn that those who worked only part of the day will receive the same wage as them.  The landowner points out that they have made an agreement with him which he is merely keeping.  We too, often may be accused of reducing God's actions to an 'agreement' we have made.  This leads to all sorts of problems.

2.  How is the Word not functioning in the text?  The Word functioning as Gospel is hidden in plain view once again in this text.  Although the landowner seems to be a tough customer, at the end the landowner reminds the workers of the generosity shown in the equal pay given to all.  Is this a gospel word?  Perhaps not, if we identify with the workers who believe  they deserve more than the others.  Is this a gospel word for some?  I would argue that it is, especially for those hired at the 11th hour.  I think of the repentant thief in Luke 23.  The word to him that he would be in Paradise with the Lord even as he hung dying on a cross was certainly a word of grace.

3.  With whom are you identifying in the text?  This, for me, is one of the crucial questions in this text.  Because the context of this passage appears to be Peter's question just prior to this story:  "Look, we have left everything and followed you.  What then will we have?" we are naturally drawn to identify with the workers hired early in the day.  In that case, this text is a warning to our tendency to self-righteousness and to making deals with God about what is "fair" and what is not.  But if we identify with the workers hired later in the day, especially with those hired at the 11th hour, all of a sudden our perspective changes.  Suddenly the landowner's actions are welcome.  This text then becomes a text about God's generosity and how we stand ever dependent on that generosity.

6.  Exegetical work:  Kittel's Theological Dictionary of the New Testament is often a treasure trove of insight and this text is no exception.  In the extended article on misthos, translated "wage" or "reward", we read:  "Because God is understood quite absolutely in the greatness of His being and the incomparability of His generous love, because He is in no way dependent on or conditioned by human action, the idea of merit is left behind and in no human action is there any place for counting on divine or human reward.  There is a reward only in so far as God in sheer love, which is unintelligible to mere justice, draws human obedience, for all its limitations, into the power and glory of the kingdom of God." (TDNT, vol. IV, p. 719)  Bernard Brandon Scott, in his commentary supports this reading with these words:  "The parable's strategy is not unlike Paul's argument that with God there is no distinction, that justification (making right) is through gift (Rom. 3:22-24)." "To insist, as the parable does, that invitation, not justice, is the way of the kingdom radically subverts the kingdom of God as a reward for a faithful and just life." (Hear Then the Parable, p. 297-298).

7.  How does the Crossings Community model work with this text?  Paul Jaster, in his analysis of this text for the 14th Sunday after Pentecost in 2015, writes of how dangerous it is when we count ourselves among the "firsts" believing we are better than the "lasts."  We become, as Jaster says, the grumbling ones, the ones with grudges against all those who have not "earned" God's favor as we have.  This finally leads to our growing mistrust in the goodness and generosity of God, and his final word to us is not a word of grace, but "Take what belongs to you and go!"  Thankfully Christ takes the burden of day upon himself, and rescues us from ourselves.  See crossings.org/text study for the entire analysis.

Blessings on your proclamation!
Posted by Law and Gospel Everywhere at 10:20 AM